An airline’s paper-based crisis response protocol, cumbersome to update and difficult to access at moments of need, is transformed thanks to the In Case of Crisis app. 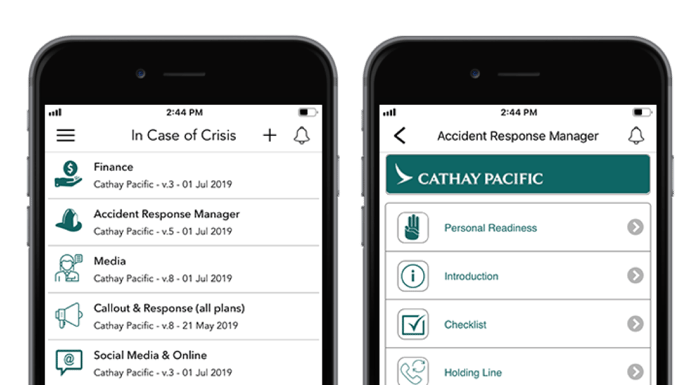 “In Case of Crisis brings to life the information for end-users and makes it a lot more usable.”

Having spent 12 years at Cathay Pacific, including positions in Australia, Asia and the US, Nicholas Donnison took responsibility for the airline’s business resilience in the Americas during 2017 as Director Quality & Crisis Preparedness.

First priority was crisis response, crucial in an industry where an accident to an aircraft can lead to large-scale loss of life and cause long lasting damage to an airline’s reputation among passengers.

The crisis response system was paper-based and there was a lot of it – more than 100 pages in a thick binder!

And it all required updating on a regular basis.

It was difficult to track who had the most up to date versions and it was going to be difficult for the people who needed it most to access the materials in the event of a crisis. It would have even required team members to drive into the city to retrieve the crisis binder from their workplaces.

Cathay Pacific’s Communications Director (Americas) recommended to Nicholas Donnison, the Director Quality & Crisis Preparedness, that he take a look at an app he had read about which offers a digital alternative to all that paper and those challenges with ensuring that updates were distributed quickly and efficiently.

That app was In Case of Crisis from RockDove Solutions.

“We did our due diligence and looked at all the technology that was available for crisis management applications,” noted Nicholas. “However, there was no-one really offering anything comparable in the space.”

The adoption of the award-winning crisis management app, In Case of Crisis, allowed Cathay Pacific in the Americas to ensure that the airline put into the right hands all the appropriate protocols and resources to guide a crisis response.

There was no paper and the app was easy for team members to adopt and use, plus the updates of the crisis plan contents were quick and effective.

And, as Nicholas Donnison points out, everything on the app was customizable to what the airline wanted it to do and how it wanted it to look.

The rollout of In Case of Crisis, initially to the team at the central Command Center, went smoothly with excellent feedback from the users.

Now the rollout is being extended to other teams, including the stations that are destinations for Cathay Pacific in the Americas, such as Washington Dulles and Seattle.

The app has allowed the crisis response plan to be re-aligned, from a team-based response protocol to a task-based procedure that is consistent and supportive of the airline’s other emergency response plans.

Over the past year, as In Case of Crisis added more features, more collaboration functions were added to the Cathay Pacific version of the app, so that upper level management could communicate and share updates. This included adding the In Case of Crisis Chatroom, an improvement over the previously used WhatsApp, which Nicholas describes as “difficult to administer”.

At the time of writing, eight teams are on the app and each has a secure chat feature in each of their plans.

The team has deployed In Case of Crisis in emergency response workshops to simulate the airline’s reaction and management of a range of scenarios – with team members following the protocols in the app to guide their response, what to say (and not to say) and easy access to the contact details of partners and third party stakeholders.

Nicholas Donnison, the Director Quality & Crisis Preparedness for Cathay Pacific in the Americas, sums up the impact of adopting the In Case of Crisis app to the airline’s business resilience planning:

“It helps bring to life the information in the plans for the end users and makes the plan content more viable to access and apply.

“We can update at any time and push out to every team member, without worrying about filing and whether each individual has refreshed their own version of the plan.

“Overall, In Case of Crisis has dramatically increased the usability and accessibility of our crisis plan resources and protocols.”

Cathay Pacific Airways offers over 100 flights per week from the USA to Hong Kong and beyond, including over 20 destinations in mainland China.

For more information, including fares and availability, visit https://www.cathaypacific.com/cx/en_US.html.

Find out how In Case of Crisis can help your organization today!